UBS: Solar will be the default technology, and will replace nukes and coal | GreenWorld 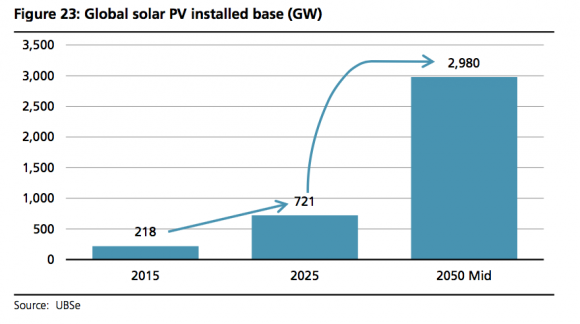 Global solar growth as projected by UBS. Solar has barely even begun its growth spurt…

A key factor in our belief that a nuclear-free, carbon-free energy system is not only inevitable but will be here sooner than nearly everyone currently believes, is not just the factual evidence of its mind-boggling, rocketing growth. Renewables are growing from a very small percentage of generating capacity–it would take many years of expansion at even their present staggering rate for them to play a major role in providing the world’s electricity. But that well-documented growth is the necessary starting point.

more: UBS: Solar will be the default technology, and will replace nukes and coal | GreenWorld