Stop the mining of radioactive uranium in the Grand Canyon! | SumOfUs 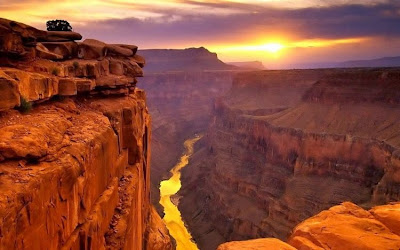 This summer, millions will stop to take in the stunning views and breathtaking natural beauty of . With its stunning topography and dazzling, majestic landscape, this geological marvel is one of the natural wonders of the world. But this year, unlike the past 20 years, visitors will be within miles of operational radioactive uranium sites.
An old uranium mine six miles from the Grand Canyon's south rim will resume operations in June, one of four operational uranium mines surrounding the park.
Uranium mining is toxic and radioactive. In 2012, the Secretary of the Interior issued a 20-year ban on new uranium claims on more than a million acres of public lands adjacent to Grand Canyon, but this doesn't prevent decades-old mines from reopening.
Tell the US government to keep the Grand Canyon and surrounding area free from radioactive contamination -- close the uranium mines threatening the region.
Already the mines are responsible for blowing radioactive dust around the area and contaminating springs and wells. Once they are back in full operation, they could create environmental damage that will last for generations—and all just to capitalize from a temporary window of profit in the erratic uranium market.
Tell the US Government to end the unnecessary and unsafe extraction in the Grand Canyon. Close the uranium mines -- now.
According to reports, uranium mining has already contaminated groundwater in the region. Reopening the mines will threaten the Colorado River basin, used by more than 40 million people for clean, safe water. One mine is positioned directly on top of groundwater basins that provide the Havasupai people, an Indigenous community with generations-long ties to the land, with their sole source of drinking water. A massive public outcry can stop this plan -- but we have to act fast to make a difference.
Already 124,000 SumOfUs members have spoken out against the commercialization of the Grand Canyon and have even come together to force PNC Bank to stop investing in another disastrous extraction industry -- mountaintop removal. If we get enough public attention we can stop this terrible plan in its tracks.
There is no reason to mine uranium when there are so many cleaner energy alternatives at our disposal. It's time to stop this uneconomic, unsafe, unsustainable and unnecessary project -- it's time to protect this sacred land and natural treasure.
Tell the US government to close the uranium mines threatening the Grand Canyon region-- now.

SIGN NOW – Stop the mining of radioactive uranium in the Grand Canyon! | SumOfUs