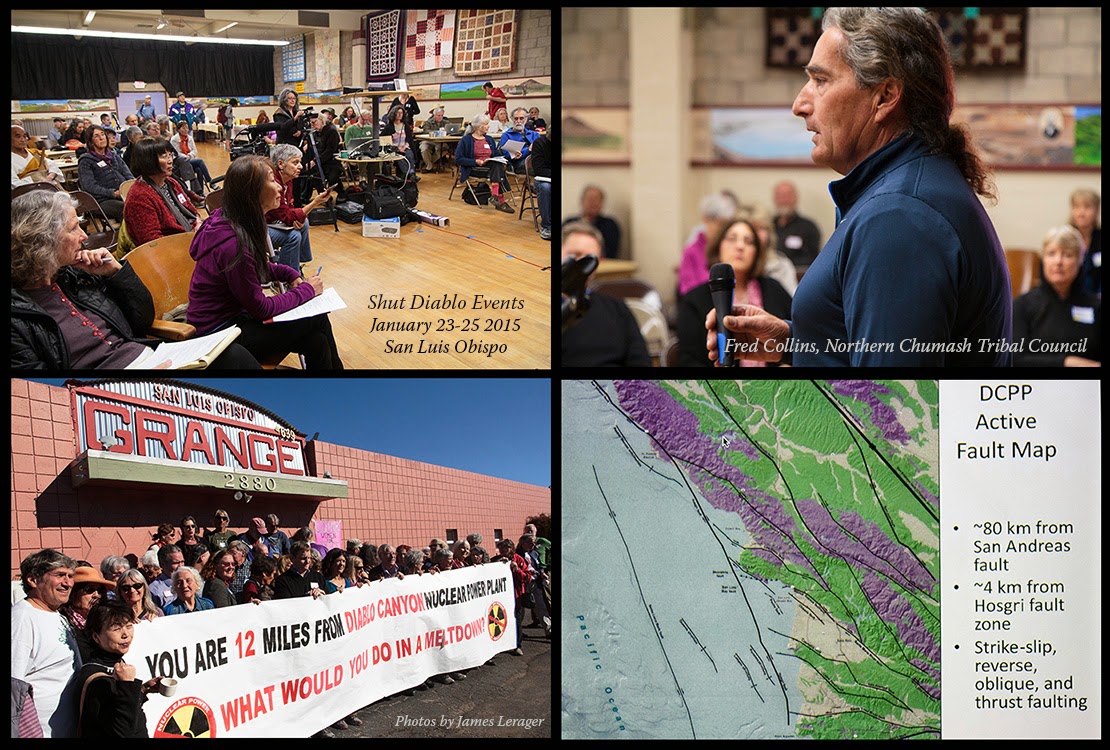 Harvey Wasserman of Solartopia, editor of NukeFree.org, summed up the conference by stating, “Nuclear energy is dirty, dangerous, expensive, and outmoded. Nuclear Free California is leading our State into a clean, renewable energy future, and in doing so, we will shut down the most dangerous nuclear plant in the nation.”


Resistance is Fertile
Back in the 1970’s and ’80’s PG&E’s Diablo Canyon nuclear power plant was the California epicenter of an anti-nuclear movement that was sweeping the country. In 1981, in what was reputed to be the largest mass arrest in U.S. history, nearly 2,000 protestors were arrested at the famous Diablo Blockade.
Despite the massive and long-lived public opposition – not to mention countless construction mistakes and problems and the fact the site was near known earthquake faults – Diablo was eventually fired up in 1984. Some may say that shows the futility of mass direct actions and non-violent civil disobedience and that the Nuclear Free California movement failed. They would be mistaken...
more: The Nuclear Free California Movement Rides Again! | NoNukesCA.net


includes: PRESS RELEASE
San Luis Obispo Mothers for PeaceFor immediate release. January 28, 2015CONTACTS: Linda Seeley, Spokesperson805-234-1769lindaseeley@gmail.comJane Swanson, Spokesperson805-440-1359janeslo@icloud.comACTIVISTS FROM THROUGHOUT THE U.S. AND JAPAN MEET IN SAN LUIS OBISPO TO DISCUSS STRATEGIES TO SHUT DOWN DIABLO CANYON AND PROMOTE SUSTAINABLE ENERGY SOURCESDuring the weekend of January 23 to 25, activists from not only California, but throughout the United States and two from Japan, gathered in San Luis Obispo to discuss key nuclear issues and strategies for shutting down Diablo Canyon, California’s last operating nuclear power plant.Recent revelations of possible collusion between plant operator Pacific Gas & Electric Company (PG&E) and the Nuclear Regulatory Commission to minimize the effects of the many earthquake faults under and around Diablo Canyon, new information about hazardous nuclear waste storage conditions and the ever-expanding renewable energy market make this a key moment to finally decommission the aging and dangerous nuclear plant sitting on the Central California coast.The weekend events began on Friday morning with a Peace Walk from Diablo Canyon to the San Luis Obispo County Courthouse, led by Buddhist Monk Reverend Sawada of Nipponzan Myohoj. The evening of January 23 featured a kick-off meeting with speakers, videos, photos and music for both activists and the general public.Meetings of a coalition of organizations under the banner of Nuclear Free California were held on Saturday and Sunday, facilitated by long-time activist Harvey Wasserman of Solartopia, Jaqueline Cabasso of the Western States Legal Foundation and Mary Beth Brangan of Ecological Options Network. Speakers from Friends of the Earth, Sierra Club, Nuclear Information and Resource Service, World Business Academy, San Onofre Safety, RADCAST, SLO Clean Energy, Code Pink, No Nukes Northwest, No Nukes Action, PSR-Oregon and many others joined organizers Mothers for Peace and Nuclear Free California in giving presentations that covered a diverse range of issues and perspectives. There were also reports from Arnie Gundersen, Chief Engineer of Fairewinds, Paul Frey of Frey Organic Winery, energy analyst Paul Gipe of Wind Works, lawyer Mike Aguirre, labor issues specialist Steve Zeltzer and Fukushima resident/activist Chieko Shiina who came from Japan for these meetings.Topics ranged from current issues at Diablo Canyon to the nuclear weapons connection, Fukushima and a class action lawsuit against the Fukushima reactor manufacturers, radiation monitoring, transitioning to renewables, utilities reform, workers rights and creating a new job base and economy for post-Diablo San Luis Obispo County.The meetings were attended by about 100 people – members of allied organizations affiliated with Nuclear Free California and individual citizens as well as award winning photographers, filmmakers, writers and media specialists — and became a convergence of energies, all directed towards shutting down Diablo Canyon and moving towards a nuclear free future. In the true spirit of our mission to protect our planet and our children, each meeting began with a blessing from Fred Collins, Tribal Administrator of The Northern Chumash Tribal Council, and was graced with a prayer vigil by Reverend Sawada.Harvey Wasserman of Solartopia, editor of NukeFree.org, summed up the conference by stating, “Nuclear energy is dirty, dangerous, expensive, and outmoded. Nuclear Free California is leading our State into a clean, renewable energy future, and in doing so, we will shut down the most dangerous nuclear plant in the nation.”###