Monitoring efforts along the Pacific Coast of the U.S. and Canada have detected the presence of small amounts of radioactivity from the 2011 Fukushima Dai-ichi Nuclear Power Plant accident 100 miles (150 km) due west of Eureka, California. Scientists at the Woods Hole Oceanographic Institution (WHOI) found the trace amounts of telltale radioactive compounds as part of their ongoing monitoring of natural and human sources of radioactivity in the ocean.

In the aftermath of the 2011 tsunami off Japan, the Fukushima Dai-ichi Nuclear Power Plant released cesium-134 and other radioactive elements into the ocean at unprecedented levels. Since then, the radioactive plume has traveled west across the Pacific, propelled largely by ocean currents and being diluted along the way. At their highest near the damaged nuclear power plant in 2011, radioactivity levels peaked at more than 10 million times the levels recently detected near North America... 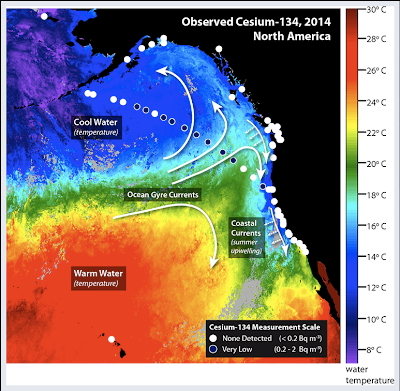 Satellite measurements of ocean temperature (illustrated by color) from July 28th to August 4th and the direction of currents (white arrows) help show where radionuclides from Fukushima are transported.  Large scale currents transport water westward across the Pacific.  Upwelling along the west coast of North America in the summertime brings cold deep water to the surface and transports water offshore.  Circles indicate the locations where water samples were collected.  White circles indicate that no cesium-134 was detected.  Blue circles indicate locations were low levels of cesium-134 were detected.  No cesium-134 has yet been detected along the coast, but low levels have been detected offshore. (Woods Hole Oceanographic Institution)

TEPCO Publishes Arrogant Press Release To The US On Fukushima | SimplyInfo

As news came out about yet another finding of Fukushima radioactive contamination offshore of North America, TEPCO published a rather bizarre press release. The corporate statement insists the contamination “Level raises no concern for human or animal health”.

This is a bit like taking healthy food advice from McDonalds...

more: TEPCO Publishes Arrogant Press Release To The US On Fukushima | SimplyInfo

Level raises no concern for human or animal health; company notes progress in protecting ocean and pledges continued monitoring of water
TOKYO, November 11--Yesterday, the Woods Hole Oceanographic Institution (WHOI), a private organization in the United States, reported that samples of water taken from the Pacific Ocean off the U.S. West Coast contain very small amounts of Cesium 134, at concentrations it has noted are "well below what is thought to be of human health or fisheries concern," and within safety limits established by the U.S. Environmental Protection Administration. Noting the report, the Tokyo Electric Power Company issued the following statement...
http://www.tepco.co.jp/en/press/corp-com/release/2014/1243939_5892.html