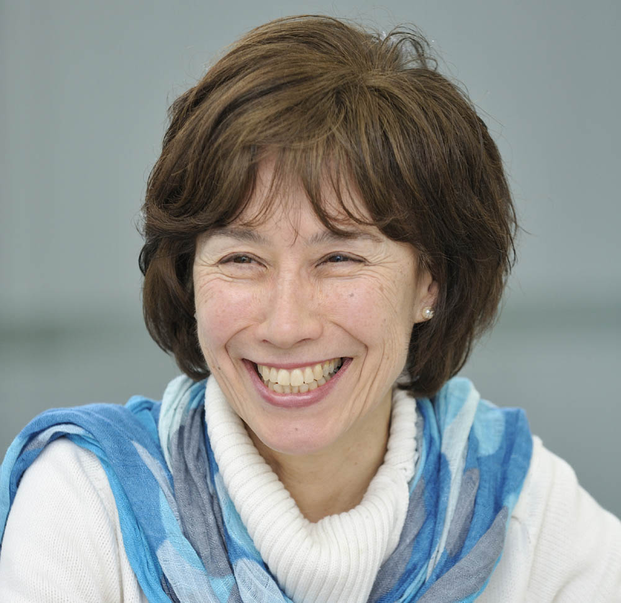 TheNuclear-Free FutureAward
is presented by the
Nuclear-Free Future Award Foundation
to
Aileen Mioko Smith
Japan
for her keyrole
in breaking the wall of nuclear lies
and offering Japan
a road to a nuclear-free future
Munich,
14. Oktober 2014
The catastrophe at Fukushima, which began on March 11, 2011, put an end to the myth that nuclear power is a source of clean and safe energy.  It is, in fact, toxic.

The public at large still does not realize that nuclear power nearly permutated into a weapon of mass destruction in Northern Japan. Ten years before Fukushima, Aileen Mioko Smith, president of Green Action Kyoto, had played a key role in exposing doctored insurance reports that proclaimed that the use of plutonium mixed oxide fuel rods in the Fukushima reactors was safe. Because of this revelation, only a small amount of the highly toxic material got into one of the reactors whose core later melted.
Aileen’s admirable whistleblowing career began in 1971, when she helped insure that photographs of the Miamata Bay mercury scandal taken by her then husband, W. Eugene Smith, made their way around the world. Eight years later she interviewed more than 250 people affected by the Three Mile Island disaster in Pennsylvania. She concluded that the citizens themselves must be involved in decisions about technology that will affect their lives, their health and their future.
In the 1980s, Aileen became a key figure in the resistance to nuclear power in Japan. The trauma of nuclear bombing and irradiation notwithstanding, the majority of Japanese had accepted the cluttering of their homeland with nuclear facilities. In 1988, Aileen was one of the activists who collected nearly four million signatures in favor of phasing out nuclear power in Japan. In 2004 she alerted the public to the utilities’ attempts to pass on to the taxpayers reprocessing costs to the tune of 8.8 trillion yen (8 800 000 000 000). In 2006, she helped win a lawsuit against Hokurikus Electric that stopped the utility from continuing the operation of an unsafe facility. In August 2010, she was instrumental in putting together a large-scale campaign bringing together almost 800 initiatives and NGOs to point out the risks, including earthquakes, of nuclear facilities. A few months later Fukushima proved their point.
Shortly after that shock to the entire nation, Aileen wrote: „We will have to redouble our efforts. There is no other choice.”