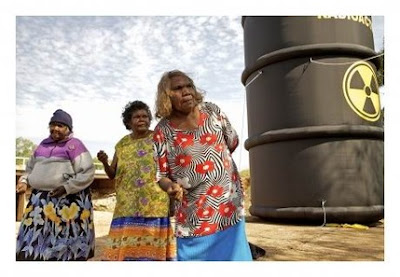 ……“Nomination of their traditional lands as a domestic nuclear waste dump site in 2007, coupled with proposals for Australia to ‘lease’ uranium and take back nuclear waste from overseas, have generated justifiable fear and concern among the Aboriginal communities in and around Muckaty (Manuwangku), 120 km north of Tennant Creek in the Northern Territory…….

Special guest speaker: Muckaty Traditional Owner Penny Phillips
“Manuwangku, Under the Nuclear Cloud” is a photographic exhibition presenting the community and country in the Northern Territory targeted to host a federal radioactive waste dump. The photos aim to break down the conception that these areas are the ‘middle of nowhere‘ and thus suitable for dumping of hazardous materials.
Sri Lankan photographer Jagath Dheerasekara received the Amnesty International Human Rights Innovation Grant 2010 and has developed the exhibition as a collaborative project with the Beyond Nuclear Initiative and Muckaty Traditional Owners.
Please support this important campaign by attending the Canberra opening and considering a donation to assist with costs for Penny Phillips to travel from Tennant Creek.
Details for contributions are at: http://beyondnuclearinitiative.com/donate/
Date:Sunday April 7, 2013
Time:430pm-6pm
Entry:$15 or $10 for students/members
Venue: Manning Clark House Gallery,
11 Tasmania Circle, Forrest, ACT