"No radiation levels were found in these samples that would directly cause the symptoms seen in the pinnipeds. Test results show radiation levels are within the typical background range for Alaska." 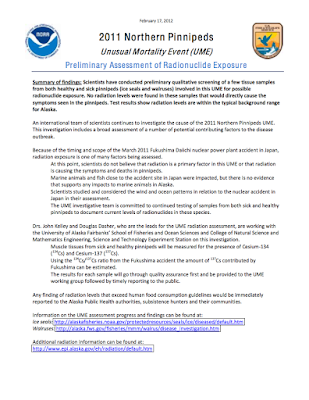 Summary of findings: Scientists have conducted preliminary qualitative screening of a few tissue samples from both healthy and sick pinnipeds (ice seals and walruses) involved in this UME for possible radionuclide exposure. No radiation levels were found in these samples that would directly cause the symptoms seen in the pinnipeds. Test results show radiation levels are within the typical background range for Alaska.

An international team of scientists continues to investigate the cause of the 2011 Northern Pinnipeds UME. This investigation includes a broad assessment of a number of potential contributing factors to the disease outbreak.

Because of the timing and scope of the March 2011 Fukushima Daiichi nuclear power plant accident in Japan, radiation exposure is one of many factors being assessed.

• Marine animals and fish close to the accident site in Japan were impacted, but there is no evidence that supports any impacts to marine animals in Alaska.

• Scientists studied and considered the wind and ocean patterns in relation to the nuclear accident in Japan in their assessment.

• The UME investigative team is committed to continued testing of samples from both sick and healthy pinnipeds to document current levels of radionuclides in these species.


Drs. John Kelley and Douglas Dasher, who are the leads for the UME radiation assessment, are working with the University of Alaska Fairbanks’ School of Fisheries and Ocean Sciences and College of Natural Science and Mathematics Engineering, Science and Technology Experiment Station on this investigation.

• Using the 134Cs/137Cs ratio from the Fukushima accident the amount of 137Cs contributed by Fukushima can be estimated.

• The results for each sample will go through quality assurance first and be provided to the UME working group followed by timely reporting to the public.


Any finding of radiation levels that exceed human food consumption guidelines would be immediately reported to the Alaska Public Health authorities, subsistence hunters and their communities.

Information on the UME assessment progress and findings can be found at:


Additional radiation information can be found at: http://www.epi.alaska.gov/eh/radiation/default.htm


what next: UPDATE re: Deaths of ringed seals in Alaska


whats up: Deaths of ringed seals in Alaska | Fish Eaters