seals deaths could be related to fukushima 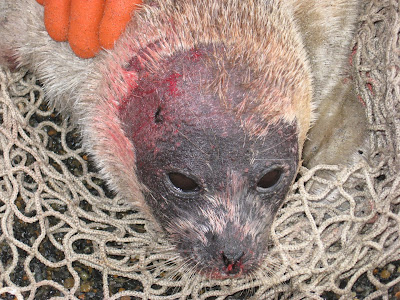 Since mid-July, more than 60 dead and 75 diseased seals, most of them ringed seals, have been reported in Alaska, with reports continuing to come in. During their fall survey, scientists with the U.S. Fish and Wildlife Service also identified diseased and dead walruses at the annual mass haul-out at Point Lay.

is this from fukushima nuclear catastrophe radiation poisoning? - it could be.

my heart sunk when i saw the seal photos, like it hadn't since i watched the second reactor explosion... visions of dying sea life back then, and now here it is? 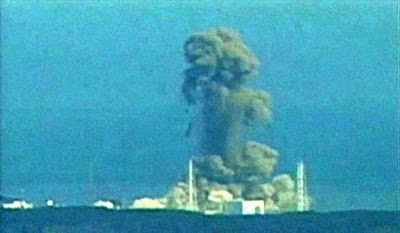 Unit 3 of Fukushima I explodes due to the ignition of built up hydrogen gas, on March 13, 2011. This is the reactor which has the extremely dangerous plutonium-laced MOX fuel... (photo enhanced for contrast and enlargement with several layers of noise, sharpening and blurring)

The University of Alaska Fairbanks' Institute of Marine Sciences is launching an investigation into whether radiation, including possibly from the Fukushima Daiichi nuclear power-plant disaster in Japan, has harmed or killed more than 100 ringed seals off Alaska's coasts...

The work so far has yielded at least one important clue: "Tests indicate a virus is not the cause," said a recent press release from NOAA and the U.S. Fish and Wildlife Service...

John Kelley, with the Institute of Marine Sciences at UAF, said he's just received a large batch of tissue from afflicted ringed seals and will soon begin the university's hunt for radiation as a possible cause...

"Thank you for your interest in this topic. As you know, NOAA is working collaboratively with many marine mammal experts throughout Alaska and the United States, as well as with a number of international scientists on this Unusual Mortality Event. We just posted an update at our website for this disease: http://alaskafisheries.noaa.gov/protectedresources/seals/ice/diseased/default.htm

"Our team continues to test for a wide variety of possible causes and contributing factors such as bacterial, viral, fungal or toxic agents. In response to your question about possible link to the Fukushima nuclear event, our scientists believe this is highly unlikely. However, we do have scientists at two separate labs analyzing tissue samples for the possibility of radiation exposure. This is a rather complicated process, which includes drying the tissue samples by a particular method before radiation testing can be conducted--which explains the length of time involved in conducting these tests." - Public Affairs Officer, NOAA's National Marine Fisheries Service, Alaska Region - - ( thank you! )

so far it appears that the NOAA press release is still current with no new info available regarding the cause of the disease - radiation testing is underway. i have received the following via email:

"The NOAA press releases are the most recent information on the diseased seals. News articles also reported on lack of a Fukushima signal in air filter surveys. WE have some tissue for analysis of radioactivity, but those results will not be available for at least a couple of months."

- and -
"...have just returned from the Alaska Marine Science Symposium in Anchorage and there were a number of presentations on the topic of the seal disease outbreak in the Arctic. It appears that the number of cases is going down, but it is unclear if this is due to a decrease in the actual disease outbreak or a lack of harvest during the winter months by subsistence hunters. Thus far all tests have been negative, so a cause has not yet been established. There a several analyses still pending.

"If you are interested in updates, NOAA has a listserve right now where information on the disease outbreak is being distributed.

"Send a blank email to:
subscribe-arctic_seal_disease@listserver.afsc.noaa.gov"


...Seals and walruses suffering from this disease have skin sores, usually on the hind flippers or face, and patchy hair loss. Some of the diseased mammals have exhibited labored breathing and appear lethargic. Scientists have not yet identified a single cause for this disease, though tests indicate a virus is not the cause...

Necropsies and laboratory tests to date have found skin lesions in most cases, as well as fluid in the lungs, white spots on the liver, and abnormal growths in the brain. Some seals and walruses have undersized lymph nodes, which may indicate compromised immune systems.

Testing continues for a wide range of possible factors that may be responsible for the animals’ condition, including immune system-related diseases, fungi, man-made and bio-toxins, radiation exposure, contaminants, and stressors related to sea ice change.

Evidence has emerged that the impacts of the disaster on the Pacific Ocean are worse than expected.

Since a tsunami and earthquake destroyed the Fukushima Daiichi Nuclear Power Plant last March, radioactive cesium has consistently been found in 60 to 80 per cent of Japanese fishing catches each month, as tested by Japan's Fisheries Agency.

"I would probably be hesitant to eat a lot of those fish," said Nicholas Fisher, a marine sciences professor at the State University of New York at Stony Brook.

Cesium was especially prevalent in certain of the species:

• 73 per cent of mackerel tested

• 94 per cent of the cod and anchovies

• 100 per cent of the carp, seaweed, shark and monkfish


Some of the fish were caught in Japanese coastal waters. Other catches were made hundreds of kilometres away in the open ocean.

There, the fish also can be caught by fishers from dozens of other nations who fish in the waters of the Pacific.

Yet, Japan is the only country that appears to be systematically testing fish for radiation and publicly reporting the results. - The Vancouver Sun (reproduced on ReaderSupportedNews) *

Beyond Nuclear note: Although this story is about seafood concerns in Canada, it is worth noting that the US allowable contamination level is greater that both Japan and Canada, and that the US imports seafood and other foodstuffs from Japan. The Food and Drug Adminstration (FDA) of the United States is allowing a contamination level of 1200 Bq/kg of just Cesium 134 and Cesium 137 to be present in food imports from Japan that are not banned outright. Foods banned outright seem mainly limited to only select items grown in the localized areas of contamination within Japan.


UPDATE 2/17: whats up: update on diseased seals: Preliminary Assessment of Radionuclide Exposure: "At this point, scientists do not believe that radiation is a primary factor in this UME or that radiation is causing the symptoms and deaths in pinnipeds."