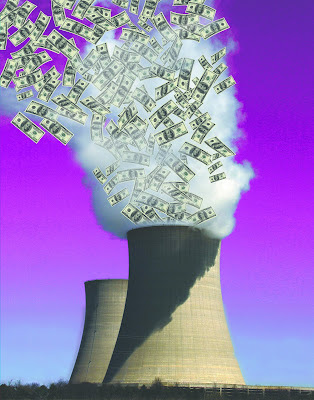 As reported in the Huffington Post, for the first time in three years, the Obama administration has not called for a major expansion in the nuclear loan guarantee program. In fact, it has called for no expansion at all.

In his Fiscal Year 2011 and Fiscal Year 2012 budget requests, fresh on the heels of explicitly promoting nuclear power in his State of the Union addresses, President Obama called for a major expansion of the nuclear loan guarantee program, to the tune of $36 billion. However, as a testament to people power over nuclear power, the nuclear lobbyists didn't get away with it -- we stopped them time and again on Capitol Hill, through tireless concerned citizen pressure! It's a huge grassroots environmental victory!

The program already had $22.5 billion, however, mostly authorized during the George W. Bush administration, snuck through on December 23, 2007 when most Americans were more tuned into holiday celebrations with family and friends, rather than the backroom wheeling and dealing by dirty energy industry lobbyists on Capitol Hill. Of that $22.5 billion already authorized, $18.5 billion was set aside for new atomic reactors, while $4 billion was set aside for new uranium enrichment facilities.

Another leg up for Vogtle 3 & 4, this time at ratepayer expense, is Construction Work in Progress (CWIP) charges on ordinary family's electricity bills, making them pay for the reactors in advance. CWIP is illegal in most states. Yet another leg up, at federal taxpayer expense: the AP1000, along with the General Electric Hitachi ESBWR (so-called "Economic Simplified Boiling Water Reactor") has benefitted from U.S. Department of Energy "Nuclear Power 2010" research and development 50/50 cost sharing...