The solutions to the climate crisis are clear: A rapid, just transition to a nuclear-free, carbon-free energy system. The only sure way to stop the global warming impacts of energy use is to transition as quickly as possible from antiquated energy models of the 20th Century and their polluting nuclear power and fossil fuel technologies … to the safe, clean, affordable and sustainable renewable, efficient, and smart technologies of the 21st Century.

Among a myriad of other problems, nuclear power is:

Rooted in human rights violations and environmental racism: First Nations, people of color and low-income communities are targeted for uranium mining and radioactive waste. Radiation harms women and girls at twice the rate as their male counterparts. And radioactive pollution indiscriminately harms future generations, poisoning the environment for hundreds to thousands of years. 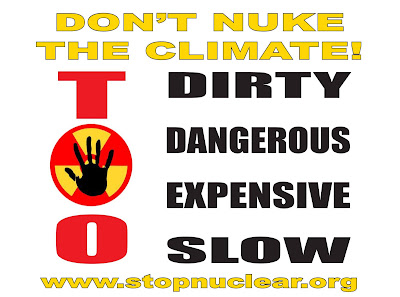 Too Dirty: Nuclear reactors and the nuclear fuel chain produce vast amounts of lethal radioactive waste, which grow whenever nuclear power is used. The nuclear fuel chain is responsible for far more carbon emissions than renewable energy generation and improved energy efficiency. All reactors routinely emit radiation and radioactive waste. Scientific bodies agree have confirmed that there is no “safe” level of radiation exposure.

Too Dangerous: Continued use of nuclear power will inevitably lead to more Fukushimas, Church Rocks, and Chernobyls. The technology and materials needed to generate nuclear energy can be diverted to nuclear weapons programs.

Too Expensive: Nuclear power is the costliest means possible of reducing carbon and methane emissions; its use crowds out investment in clean energy sources.

Too Slow: Use of nuclear power to reduce fossil fuel emissions would require an unprecedented nuclear construction program, beyond the capability of the world’s manufacturers within an acceptable time frame.


Please Join Us in Supporting the Don't Nuke the Climate Campaign! | Nuclear Information and Resource Service