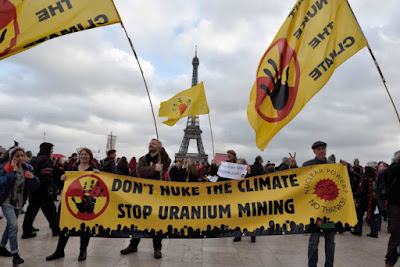 Tell Your Senators to Oppose Dirty Perry! NOW is the time. Call and write to your Senator TODAY to VOTE NO to Rick Perry for DOE Secretary!

Tell Your Senators: Please vote NO against Rick Perry for Department of Energy (DOE) Secretary. Keep Nuclear Waste off our Roads, Waterways, Rails—Stop Perry from heading US DOE!

VOTE NO to Rick Perry for Department of Energy Secretary because:

1)  He is a Climate Change Denier

2)  He has strong Conflicts of Interest with nuclear and fossil fuel companies. Perry only recently stepped off the Board of Dakota Access pipeline owners and has a long history of supporting the WCS nuclear dump.

3)  His support for Waste Control Specialists (WCS) nuclear waste company (whose owner, the late Harold Simmons, was one of Perry’s biggest contributors) and his connections to AFCI (another hopeful dump company) could trigger thousands of shipments of intensely radioactive waste on our roads, rails and waterways, through cities and breadbasket farmlands, putting much of the nation at unnecessary risk for decades, without solving the nuclear waste problem. He is likely to support the private companies’ efforts to profit from moving high level waste across the country, exposing communities and travelers, putting the public at unnecessary risk. US taxpayers would be liable while companies friendly to Perry profit.

4)  Perry has shown that special interests weigh more than the well-being of American taxpayers and environmental justice concerns.

Perry's longstanding ties to WCS would present a conflict of interest in his role as Energy Secretary, and would require that recuse himself from involvement in both that project and development of legislation that may benefit WCS or other proposed Texas nuclear waste storage sites. We cannot have a DOE Secretary whose integrity in developing nuclear waste policy and management programs could be so compromised, the independence of whose judgment on matters of such national importance would constantly be in question, or who would have to abstain altogether from major activities of the agency of which he is supposed to be in charge.

Perry would be the father of the largest hazardous shipping campaign ever: thousands of radioactive trucks and railcars traveling through most of the continental US states, and by barge on rivers, ocean and Great Lakes coasts through some of our largest cities to a site that is supposedly temporary. That is bad policy; it is bad planning and I ask you to hold the Department of Energy to a higher standard. Do not support Dirty Perry for Secretary of Energy.

via Nuclear Information and Resource Service