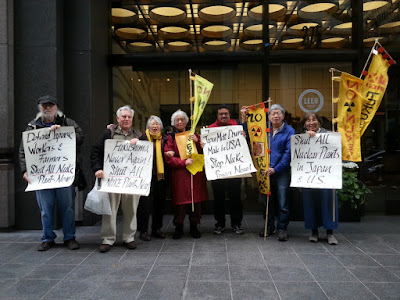 Our 54th and the very first of 2017 Every 11th of Monthly Rally went on the cloudy day, just on the next day of heavy rainy day. It was very fortunate that the sky was cooperating.
There were eight strong activists. And we made sure this protest will go on.
The half of us spoke out.  One of them was Don from Abalone Alliance and Ricardo from Puerto Rico.
The letter to PM Abe was written and read by Steve Zeltzer. Attached please see the bottom.
Unfortunately there was no internet Ustream by IWJ.SF office at this time. Though we are expecting to have the video shooting at 2/11.
We’ll see you again at the next 2/11 Rally!
*
干ばつに続き洪水と両極端な天候の中、前の日の雨がやっと収まり、１月１１日は曇りの中を８人が集まり、今年も政府への抗議を続けていくことを確認しました。なぜなら６年近くたった今も、福島第一は事故収束に困難をきたし、健康被害が増加し、当初の予想をずっと上回り原発処理費が２１・５兆円も必要だといわれています。 いろいろなことが滞ったままなのです。それでも、政府は大多数の国民の声を押しつぶし、再稼働、原発輸出を推進しています。
プエルトリコからの活動家もスピークアウトをし、不正義への抗議の重要さを訴えました。
今回は都合により、IWJ・SF支局さんのインターネット中継はありませんでした。
毎回首相あてに手紙を書いていますが、今回はステイーブ・ゼルツアーが書き、朗読しました。添付を参照ください。
それでは次回２月１１日にはもっと多くの人が参加してくれることを願います。
『沈黙は容認なり』
reported by NNA member Chizu Hamada

− letter to PM Abe −
1/11 NNA Letter To PM Abe
Dear PM Abe,
We are here to day at the San Francisco Japanese consulate on January 11, 2017  to call for the immediate halt of the restarting of Japan’s remaining nuclear plants. The Fukushima nuclear plant contamination and clean up continues more than five years after the disaster.
You have also told the people of Japan that the area around the plant has been decontaminated yet radioactive material continues to spew out of the plant and even the rain of Fukushima is contaminated.
Even with these facts you and your government are demanding that the children and families return to Fukushima and they will lose their housing subsidies. This is unconscionable. Although there have already been over 175 cases of thyroid cancers you now want young children and their families and yet you want these children and family to return. Although the government is now really the owner and operator of TEPCO you are allowing subcontractors  including even Yakuza to employ clean-up workers who have not been properly trained on working with radioactive material. Many of these workers are not properly protected and will be contaminated and end up with cancer and other diseases without government compensation. We demand an end to the use of private contractors by your government.
You have also told the International Olympic committee that the problem at Fukushima  is over yet even though  the government’s budget for this clean up is exploding with no end in sight. The billions of dollars for so called &quot;decontamination&quot; have gone to contractors that are the same funders of your party and government.
Your continued reliance on nuclear power has also created a financial crisis for Toshiba which purchased the Westinghouse nuclear division. It is now virtually bankrupt because of the massive expenditures to make the unsafe and inefficient plants work  in the United States. The reliance and support for nuclear power are unsustainable.  We support energy efficiency based on non-fossile fuel technology like solar panels and other renewable products. We also warn not only the Japanese people but the American people that these nuclear plants are virtual time bombs with a highly dangerous accumulation of thousands of used waste material and rods with no place to go. There is no solution to the disposal of this nuclear waste at all the plants in Japan and the US and the continued operation of these plants will only add to the nuclear waste and contamination. We also oppose the growing militarization of Japan and the Asia Pacific. We do not need more bases in Japan whether they be US bases in Okinawa or other bases in the region.
The use of secrecy laws and a proposed &quot;conspiracy laws&quot; as well  to silence political opposition and to intimidate those opposed to nuclear power must be stopped. We know that these laws have already been used to intimidate the threaten journalists in Japan in according to the U.N. Special Rapporteur David Kaye who reported that journalists and free speech rights are under attack. &quot;Japanese journalists were feeling pressured to avoid sensitive topics, and that some told of being sidelined because of complaints from politicians. &quot;The independence of the press is facing serious threats — a weak system of legal protection, persistent government exploitation of a media lacking in professional solidarity,&quot; We call for the cancellation of these laws and the right of journalists and the media to fully cover the real conditions of Fukushima.
Today we also stand with the majority of people of Japan who have opposed the continued restarting of these nuclear power plants. Even two former prime ministers Koizumi and Kan have opposed the restarting of these plants because they understand that another Fukushima type disaster could destroy Japan completely. One has to wonder how you and your government could take a gamble that could possibly destroy the entire country. Japan is a small island and there is no place to escape.
We stand for the defense of the people of Japan, our world environment and the survival of the planet. Our voices will not be silenced.
Steve Zeltzer
No Nukes Action Committee