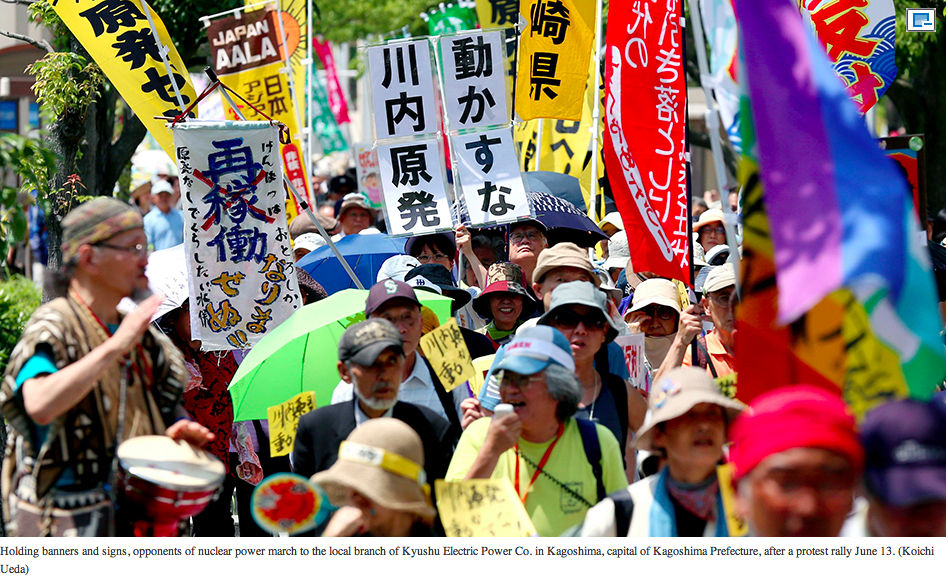 KAGOSHIMA--More than 1,000 protesters assembled before the prefectural government building here June 13 to oppose moves to restart a local nuclear power plant.
If the Sendai nuclear plant in Satsumasendai, Kagoshima Prefecture, were to go back online, it would mark the nation’s first restart under new safety standards brought in after the March 2011 nuclear disaster in Fukushima Prefecture.
The rally, which organizers deemed a “critical phase” in their anti-nuclear efforts, coincided with the start of the prefectural assembly session.
“Governor, why don’t you pick a fight with the central government like the Hakodate mayor has done to protect the life and health of residents?” Satoshi Kamata, a noted nonfiction writer who has written extensively about labor and environmental pollution issues, barked through a loudspeaker.
Kamata, 76, was referring to a lawsuit filed in April by the Hakodate municipal government in Hokkaido to demand a halt to the construction of a nuclear power plant across the Tsugaru Strait in Oma, Aomori Prefecture.
“After serious problems of pollution in the 1970s, Japanese learned that their lives are more important than the nation’s economy. Why are we regressing to the same situation in the question of nuclear power?” asked Kamata, who flew in from Tokyo, where he regularly participates in a weekly anti-nuclear protest held outside the prime minister’s office.
Among the other participants were evacuees from the disaster at the Fukushima No. 1 nuclear power plant. The rally was organized by about 90 groups, including a local co-op.
The protesters submitted to prefectural officials a petition signed by about 120,000 people from across Japan in protest to the restart of the plant, which is operated by Kyushu Electric Power Co...