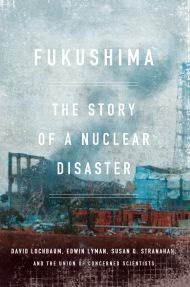 A clear-eyed overview of the nuclear industry and the Japanese disaster doesn't split hairs over the risk: It can happen here. - LA Times

Fukushima: The Story of a Nuclear Disaster is a definitive, scientific retelling of what happened at Fukushima—and an urgent reminder that U.S. nuclear power isn’t as safe as it could and should be.

Written by nuclear experts in compulsively readable detail, this book takes a moment-by-moment look at what went wrong at Japan’s Fukushima nuclear power plant.
The book draws on firsthand accounts, as well as detailed technical records and media coverage, to recreate the events preceding, during, and after the meltdowns of three of Fukushima’s nuclear reactors.
The authors also address whether or not a Fukushima-scale nuclear disaster could happen in the United States—with sobering (but actionable) conclusions.