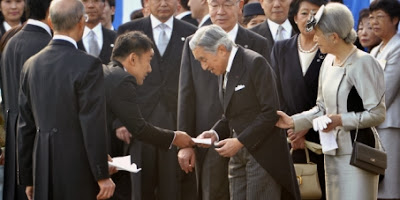 We Citizens of the world, of many nationalities, support the earnest sincere action of the young Japanese lawmaker Taro Yamamoto, breaking customary protocol to remit a letter to the Emperor of Japan, wishing to draw the Emperor's attention on the plight of his people, Fukushima's people and children left to live in an environment heavily contaminated by the ongoing 2 years and 8 months catastrophe of Fukushima Daiichi Nuclear plant.


(Reuters) - A Japanese lawmaker handed Emperor Akihito a letter on Thursday expressing fear about the health impact of the Fukushima nuclear disaster, breaking a taboo by trying to involve the emperor in politics.


Taro Yamamoto, who is also an anti-nuclear activist, gave Akihito the letter during a garden party, setting off a storm of protest on the Internet from critics shocked at his action.
"I wanted to directly tell the emperor of the current situation," Yamamoto told reporters, referring to the crisis at the Fukushima nuclear plant north of Tokyo, which has been leaking radioactivity since it was battered by an earthquake and tsunami on March 11, 2011.
"I wanted him to know about the children who have been contaminated by radiation. If this goes on, there will be serious health impacts."
Akihito inclined his head as he took the letter in his hand but then handed it to a nearby chamberlain. Yamamoto said he made no comment.
About 150,000 people were evacuated from around the plant which suffered a series of explosions and meltdowns. A large area of surrounding land is off-limits due to high radiation.
U.N. scientists said this year the evacuation helped prevent rising cancer rates and other health problems. Traces of radioactive contamination have been found in rice and far out in the Pacific Ocean.
Akihito, who turns 80 in December, fills a purely ceremonial role and remains above the political fray.
He has striven to draw the imperial family closer to the people. Conservative Japanese revere him, while many others feel a fond affection towards him. Some Japanese see the family as irrelevant.
Some Internet critics called on Yamamoto to resign from parliament. "This was really low," one critic wrote in a Web forum.
Chief cabinet secretary Yasuhide Suga also expressed disapproval, telling a news conference: "There is a line for appropriate behavior at such an occasion".