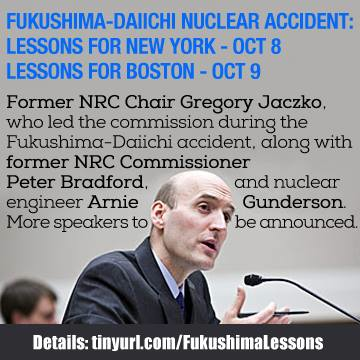 Former Chairman of the U.S. Nuclear Regulatory Commission joins panel to discuss the risks of nuclear power at the Indian Point and Pilgrim Nuclear Power Stations


NEW YORK (Sept. 30, 2013)—A panel of speakers that includes the former Chairman of the U.S. Nuclear Regulatory Commission (NRC), Dr. Gregory Jaczko; former NRC Commissioner Peter Bradford; and nuclear engineer, Arnie Gundersen, is scheduled to share their perspectives on nuclear safety and the future of nuclear power. The panel will specifically address concerns regarding Indian Point Nuclear Power Plant now operating with an expired license in Buchanan, New York and Pilgrim Nuclear Generating Station in Plymouth, Massachusetts. The seminars will be held in New York City on Tuesday, Oct. 8 and in Boston on Wednesday, Oct. 9. More speakers will be announced.

Jaczko was the Chairman of the NRC during the earthquake and tsunami that triggered the catastrophe at the Fukushima-Daiichi nuclear plant in Japan. He was confronted by three reactor meltdowns and a nuclear crisis that persists to this day. In 2012, Jaczko cast the lone dissenting vote on plans to build the first new nuclear power plant in the U.S. in more than 30 years.

Earlier this year on June 4, 2013, Jaczko, Bradford and Gunderson were joined by Japan’s former Prime Minister, Naoto Kan, where they spoke at the San Diego County Administrative Center about their concerns regarding the safety of the San Onofre nuclear power plant. Three days after the panel, the plant was closed permanently.

U.S. citizens are now questioning the safety of the Indian Point and Pilgrim nuclear power plants. In the event of a catastrophe like Fukushima, these plants would threaten millions. A nuclear disaster at Indian Point would threaten the entire population of New York City and the outlying metropolitan area. A crisis at Pilgrim poses similar danger to millions in and surrounding Boston.

The panel discussion is open to the public and news media.

For media and the public who are unable to attend, the New York and Boston panel can be heard on a live feed at http://www.livestream.com/fukushimalessons, these webcasts will be archived at the link for at least 30 days once live.

Why: Indian Point is a three-unit nuclear power station located in Buchanan, New York, 25 miles outside New York City. Potential risk of a nuclear crisis at Indian Point would pose a danger to millions in the New York area. The technology at the plant is 40 years old, and the containment domes were not designed to hold 100 tons of melting uranium in event of an accident and meltdown. Both Chernobyl and Fukushima are examples of accidents in outdated nuclear reactors.

Why: The Pilgrim Nuclear Generating Station is located in Plymouth, MA, 40 miles outside Boston. Last summer, Jaczko and the community presented legal appeals and environmental warnings to shut down Pilgrim, however, the NRC renewed the 40-year-old nuclear plant’s license for another 20 years despite these oppositions. A nuclear crisis at Pilgrim would pose a danger to millions of people who live within 50 miles of Pilgrim, including those in the city of Boston.