Help Us StopTrump’s #DirtyEnergy Plan and Save Our #CleanEnergy Future 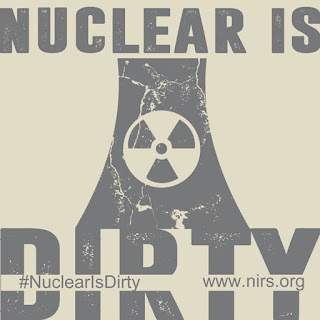 Trump has issued an order calling for a massive dirty energy bailout to ensure America continues to rely on nuclear and coal for years to come. This is a fight for America’s clean energy future and everything that comes along with it--millions of good jobs, thriving communities, and safe, healthy food, air, and water.
Despite renewable energy's benefits, President Trump is prioritizing coal and nuclear industries and their executives by funneling billions of dollars in subsidies to keep dirty, old, dangerous power plants going.
NIRS is organizing to stop them, and we need you to join us!  We have to educate and mobilize the public across the country. It is going to take petitions, protests, and lots of grassroots organizing – and we have to start now.
If this story sounds familiar ... it should! Trump tried to do the same thing last year, demanding massive subsidies for uncompetitive nuclear and coal plants.

But we stopped him! In January, federal regulators listened to the public and said no. Now, just a few months later, Trump is back at it again -- with an even larger and worse bailout plan.
We’ve started this crowdfunding campaign to raise $20,000 to get this effort off the ground.  The good news is: Your donation will go twice as far toward making that happen. Another generous supporter is offering to match every dollar you contribute, so your support will be doubled.
Stopping Trump’s Nuclear and Coal Bailout means more of the dirty radiation and soot factories will close, and demand for solar, wind, and other clean, safe, efficient, renewable energy sources will accelerate.
But here’s the thing: we need to reach thousands more people, to make sure they know about Trump’s plans and can take action to stop it. We ask that you make a contribution to support the campaign, so we can reach more people like yourself. We also hope you will tell your friends about the petition, as well as this crowdfunding effort.
The good news is, some generous donors have offered to match every donation, no matter how big or small, to help us get there. For every dollar you and your friends give, another donor will match it.
Thanks for taking the time to learn about our campaign and for whatever support you can give.
For a Nuclear-Free, Carbon-Free World!
The NIRS TeamJasmine Bright – Communications Specialist
Diane D’Arrigo – Radioactive Waste Project Director
Lyn Griffith Taylor – Energy Democracy Specialist
Denise Jakobsberg – Administrative Coordinator
Tim Judson – Executive Director
Mary Olson – Director, NIRS Southeast